When assessing the challenges humanity is facing it is important to consider the evolution technology can effect in our current economic systems. UBIFL, Universal Basic Income Feedback Loop, is a structure designed to provide a minimum income for the next generation. The most practical design would take into consideration several economic and environmental factors and implement a system that is efficient and environmentally sustainable.

Many of the obstacles today are compounded by the fact that we are still in the early stages of our intelligence growth spurt. I know. What? Universal Basic Income is a solution that will render more efficient supply chains, increase income security and restructure social support programs of nations throughout the world.

Standing on the Shoulders of Giants

We’ve come a long way since the time of the hunter-gatherer. The principles of economics and the value we place on goods and labor are now a staple of our way of life. Starting around 600 BC coinage began to be minted as a store of value that became the primary medium of exchange that people traded for goods and services.

Black smiths, farmers, carpenters, tailors, soldiers, merchants and every other function that has existed for centuries learned to trade and get compensated for an easily transported liquid asset that could be converted to whatever good or service being acquired. This was the beginnings of the modern economy and was a significant improvement over a barter and trade system.

Industrialization brought about another shift in the production of goods and the labor required to produce them. This shift was a result of the advent of the modernazation of factories and invention of machinery.

Tractors to plow and harvest fields, machines to manufacture the tractors and other tools and equipment. Assembly line production allowed mass quantities of these goods to be sold and purchased at lower prices allowing more people into the economic loop. Roughly five percent of the farming workforce was required to produce the same amount of produce that was once harvested manually from the fields.

The workforce now consisted of operating the machinery instead of manually producing or harvesting the goods. Other innovations around this time, like the telephone, grew the workforce to include inside sales and customer service roles. Although, many industries still functioned manually: architectural and engineering document creation, bookkeeping, ect…., but this would soon change. 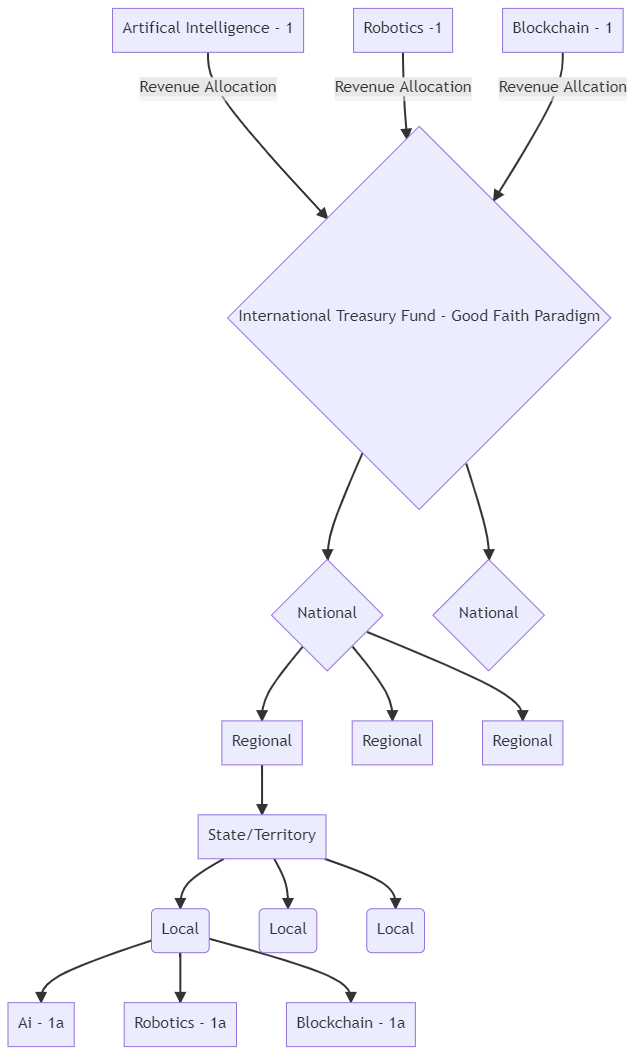 The electronic age, or computer age, began a shift of manual record producing and keeping into digital formats. This change brought about an accelleration to the innovation cycle. Architectural and engineering design, advertising, accounting and others, began being created, modified and tracked digitally.

Online shopping, social networking, and other electronic services began to flourish at the dawn of the 21 century. This is where we are now, today’s society. How society can evolve from here is by reducing the amount of people required to produce the same results.

This will be the beginning of the next evolution of society.

Fig.1 is a preliminary design of UBIFL.

Artificial Intelligence can fill a large percentage of the roles people perform in customer support and sales. Many of the machines in factories and the equipment used in farming can run autonomously - meaning they can be operated with minimum human involvement. Blockchain technology is an open and transparent ledger that can be used to track public debits and credits distributed in a hypothetical Universal Basic Income Feedback Loop.

Human labor for the monotonous labor of data entry, troubleshooting and sales can be delegated to the machines.

What you should take away from this is that society has evolved over time and we’ve successfully adapted every time. Furthermore, we haven’t addressed economic, social or environmental issues but we are at a point where many nations are drowning in debt, much of the population could stand living healthier lives and environmentally we need to regenerate earth to better effect future generations quality of life.